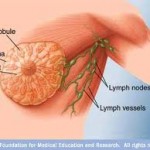 Based on the histopathological examination, it may be of different types as-
a)  Infiltrating ductal carcinoma with productive fibrosis
b)  Medullary carcinoma
c)  Tubular carcinoma
d)  Mucinous carcinoma
e)  Papillary carcinoma
f)   Adenoid cyst carcinoma
2)  Lobular carcinoma of the breast:
As this does not form a palpable mass, the diagnosis is by chance, during HPE. It may be of in situ or invasive types. When in situ, there is a uniform proliferation of cells within the lobule.  But there is always a risk of it becoming invasive in nature. The invasive type sometimes mimics inflammatory or benign lesions. This type is known for its bilaterality and multicentricity.

Symptoms of Breast Cancer:
1)   Generally occurs after 40 years of age, but can occur during any age after puberty.
2)   Patients present with a painless lump in the breast, generally in the upper, outer quadrant.
3)   Any lump in the breast is always considered as breast cancer until it is proved otherwise.
4)   Initially, it is painless. Gradually as it enlarges, it causes discomfort, which is generally termed by the patient as pain. In the advanced stages, pain may become an associated feature.
5)   Retraction of the nipple may be one of the important features.
6)   Inflammatory carcinomas are painful.
7)   Discharge through nipple is occasionally seen.

Investigations in Breast Cancer: Mammography and Biopsy are two basic and important investigations to rule out breast cancer.

Adjuvant therapies-
Micrometastasis occurs even before the accurate diagnosis of breast cancer can be carried out. Hence along with surgical procedures, adjuvant chemotherapy and adjuvant hormonal therapy play a vital role in prolonging disease-free intervals and also the survival rates.
Treatment of advanced cases of breast cancer (Stage 3 & 4): Advanced cases of breast cancer are associated with local ulcerations, metastases in bone, metastases into lungs resulting in dyspnoea etc. Once the carcinoma has spread beyond the breast and regional lymph nodes, only palliative treatments, no curative treatments can be provided.
Locally advanced cancers are those tumors which are greater than 5 cm. in diameter or have associated fixed axillary lymph nodes, but with no evidence of distant metastases. Thus it includes not only large fungated mass in the breast but also a small tumor in the breast with large and fixed axillary lymph nodes. Locally advanced carcinomas have poor prognosis and high rates of recurrence. For managing them, surgery along with chemotherapy and radiotherapy are highly essential. The aim of these combined modalities of treatment is to provide local control of the disease and to prevent or delay distant metastasis.

Copyright © 2021 Ayur Advice.
DISCLAIMER
The entire contents of this website are intended solely for the purpose of disseminating information. The information provided has not been evaluated by the FDA, and neither is it intended to diagnose, treat, cure or prevent any disease or disorder in any way or form.
Note that all healthcare information offered by the site are not intended to replace your own doctor's advice or any other medical recommendation. Neither is Ayuradvice.com to be held responsible, in any shape or form, for the applicability of any opinions or recommendations with respect to your symptoms or medical condition.
All information present in the website is the sole property of Ayuradvice.com and may not be copied or reproduced completely or in part thereof without the explicit written consent of Ayuradvice.com
7ads6x98y